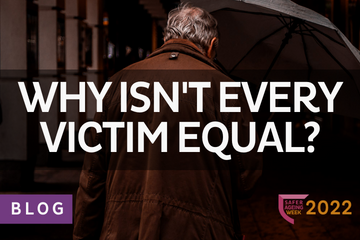 Welcome to Safer Ageing Week 2022. A week of bringing older victims of abuse and neglect out of the shadows to the top of the agenda. This week, Hourglass will help people right across the UK understand why older victim-survivors need our help more than ever in 2022.

Older people were the last in line during the pandemic, they often fall through the gaps for local government safeguarding, they are unquestionably at the back of the queue for UK Government funding and have been squeezed into the only live domestic abuse Government funding stream, the Violence Against Women and Girls fund, which accounts for only a proportion of our essential services.

The facts speak for themselves. A leading child abuse charity received ov

er £14m from the Government in the last financial year, a well-known animal abuse organisation was awarded £5m and even a local domestic abuse charity, serving one county, received £500k. Hourglass, the only UK-wide charity for older victims, were granted less than £300k.

This in the face of 15,000 calls, upwards of 8,000 cases and a staggering 2.7m people across the four nations affected by the abuse of older people.

Safer Ageing Week is asking the Government of the UK and Scotland, the assemblies in Wales and Northern Ireland to have a think about why these inequalities exist. Yes, Hourglass wholly supports the urgent need for child victims, domestic abuse survivors and mistreated animals to receive these vital funds. But why are older victims not treated equally? Why isn’t every victim equal?

During the week we’ll be delivering an open letter to the UK Prime Minister, Rishi Sunak, asking to fund Hourglass fairly and to treat older victims equally. We’ll be announcing landmark partnerships with major third sector leaders, corporate supporters as well as unveiling our four new patrons – one for England, Northern Ireland, Scotland and Wales.

On top of those plans, we will also be conducting a webinar on financial abuse as we launch our Give An Hour scheme; we’ll be telling the world about a new service in London – our first foray into the capital with an older person’s IDVA (Independent Domestic Violence Advocate) as well as releasing a headline Safer Ageing Index for Northern Ireland.

This communication comes off the back of a letter sent by our Patron, the late Baroness Greengross, just before she sadly passed away. She called for fair funding for older victims and her passionate letter has never received a proper response from the PM. We are urging the new incumbent to honour his campaign pledge and ensure his Ministers meet with Hourglass to discuss tackling the abuse of older people. So far, such a meeting has been cancelled five times.

Hourglass is also calling for YOUR support. Because, put simply, the best ambassadors are the people who understand the need to lift the veil of secrecy around the abuse of older people.

Our best influencers are those people who understand our battle and are ready to stand up and be counted. Because without your help, every victim won’t be equal; every victim will simply be a number rather than a case that needs support and care. It’s time to stand up.

Support Safer Ageing Week by signing the letter, making a small financial pledge by visiting www.wearehourglass.org.uk/donate or texting SAFER to 70460 to donate £10.

You can also support Safer Ageing Week by downloading our media pack, signing up to our newsletter www.wearehourglass.org/newsletter-sign and liking, sharing and retweeting our social media messages.