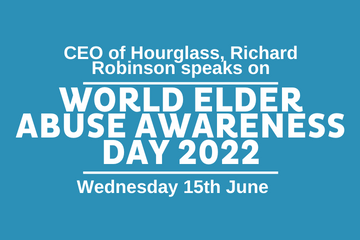 The abuse of older people is internationally recognised once a year by WEAAD, or World Elder Abuse Awareness Day on 15th June. Charities and governments across the world aim to shine a light on this horrifying form of abuse and pledge support to raise the profile and find solutions.  Sadly, it’s a more muted event here in the UK, where swathes of society are still struggling to accept that ‘elder abuse’ even exists and how it relates to them.

Every year, more than a million older people are physically, emotionally, financially or sexually abused in the UK. This is a truly damning indictment of how our society views and values older people. Hourglass is the only UK-wide charity dealing with the issue and has been doing so for almost thirty years. We receive around 12,000 calls and cases per year and operate Europe’s only 24/7 helpline for victims, their families and care practitioners. However, for many callers this is their first realisation that the abuse of older people is an issue and events like WEAAD can help change that.

So, as we mark World Elder Abuse Awareness Day, what can we all do to support the cause? Firstly, we need to learn to not shy away from the subject or pretend it doesn’t exist. No-one wants to believe that their beloved mother, father, grandmother or grandfather could be abused by someone in a position of trust. But it happens every day – in the same way as the nightmare of domestic abuse, child abuse and animal abuse occurs and we see the cases highlighted on TV news or in newspapers. Only elder abuse rarely features in the news or on the television and therefore it remains under the radar.

Secondly, services battling elder abuse are critically underfunded across England, Northern Ireland, Scotland and Wales. Hourglass has doubled its frontline services to deal with the rise in cases since the pandemic and the UK Home Office has provided one year of support for an after-hours triage service. However, unless more people donate and support charities like Hourglass, services will be reduced or vanish altogether.

There is an old phrase ‘The lack of understanding does not hurt, as much as the lack of effort to understand’ and this is why Hourglass have launched a myth-busting campaign to help build that vital knowledge. I’ve chosen five here to start the ball rolling (there are ten on the charity’s website at www.wearehourglass.org) and Hourglass hopes that if more people can begin to comprehend the growing epidemic of elder abuse – more of us will be part of the solution.

Myth No. 1: Most abuse of older people occurs in nursing homes.

Fact: Most abuse of older persons occurs at home, with family members and other loved ones as the perpetrators. Even though the abuse of older people does occur in care and nursing homes, it most often happens at home behind closed doors, in every community, and regardless of socioeconomic status. In 2021-22, Hourglass received 2106 calls where abuse had taken place in the victim’s own home, compared to only 234 calls where abuse had taken place in a care or a nursing home.

In almost all the cases we deal with, it’s not a stranger causing the abuse, it's a grandson, niece, daughter or family friend. People they put their trust in to not take advantage and harm them.

Myth No. 2: Caregivers who abuse do so because they are stressed.

Fact: Caregiver stress is real. But blaming the abuse of older people on stress moves the responsibility away from the abuser. We know that taking care of an older loved one can be one of the most challenging duties you can undertake but the vast majority of family caregivers do not abuse their loved ones. Caregiving by its very nature can be stressful — but stress doesn’t cause elder abuse. Most stressed caregivers do not harm the person they care for.

Myth No. 3: If older people say they are not being abused, it didn’t happen.

Fact: Many older people who are victims of abuse decide not to tell anyone what happened to them, Hourglass and other expert practitioner organisations suggest. Many don’t report the abuse because they are afraid of getting a loved one in trouble. Some don’t report the truth because they worry the alternative — such as going to a nursing or care home would be worse.  People may also be ashamed and blame themselves. They think ‘how could I have let this happen?’

Myth No.4: Domestic abuse within an intimate relationship only involves younger couples.

Fact: “Victims aged 61+ are much more likely to experience abuse from a current intimate partner than those 60 and under.”[1] A study by Safe Lives underlines this common misconception, as well as highlighting that older victims are more likely to be living with their abuser and are less able to attempt to leave them. Between April 2021 and March 2022, Hourglass received 653 calls related to older victims of domestic abuse, although the number of yearly UK cases is far higher than that. Domestic abuse is not just about younger couples –it’s just as important to understand the domestic abuse of older victim survivors too.

Myth No.5 – There is nothing you can do to support older victims of abuse

Fact – This is untrue, there are a number of things you can do to support older friends or family members who you fear or know are victims of abuse. These include phoning the Hourglass helpline (08088088141), finding a useful support organisation local to you through our knowledge bank signposting tool, or talking to a trusted friend or family member, your GP, or your local authority/trust adult safeguarding team.

Our research reveals that more than 1 in 3 people do not believe that ‘acts of domestic violence directed towards an older person’ count as abuse. Our charity’s unique work and analysis illustrates how the abuse of older people is nearing epidemic levels with nearly half of those recently polled believing that failing to attend to an older person’s needs in a timely fashion is not abuse. If you’d like to support the unique work of Hourglass please head to wearehourglass.org/donate or ring on 0208 835 9280. More importantly, if you or someone you know has been affected by abuse please make that call and talk to the 24/7 Hourglass team on 0808 808 8141, visit our website for Instant Message support or text our confidential SMS service on 07860 052906