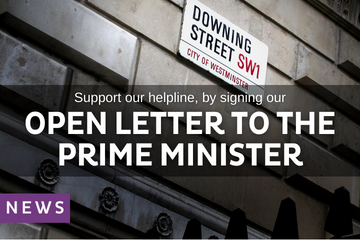 Please sign our open letter to Prime Minister Rishi Sunak, asking the Government to support the Hourglass. You can read the letter below and click on the link here to sign

On Monday 20 June 2022, just three days before she died, Baroness Greengross OBE wrote to your predecessor asking that the Government provide the funding needed to run the Hourglass 24/7 Helpline, which uniquely supports older victims of all forms of abuse. In this letter she wrote:

Abuse of older people requires specialist support from trained professionals with experience working with older victims. This is not to take away from the important work of other domestic abuse organisations, however, for older people, it is vital that there is a Helpline and organisation that can support them. By properly funding this service we can ensure that victims are given the support they need and that perpetrators of this abuse are more likely to be stopped.

Since then, Hourglass has been informed that the Home Office will be running “an open commercial competition in the coming months for these services”. This will be as part of the government's consolidated Violence Against Women and Girls (VAWG) Support and Specialist Service Fund to “by and for” organisations. Given the Hourglass helpline is the only specialist support service dealing with abuse of older people, a commercial tendering process does not seem appropriate, especially when other abuse charities have been awarded government contracts without having to go through a similar process. We are also concerned that any bidding process will take months and, in the meantime, Hourglass needs funds to continue the 24/7 helpline.

A study by Hourglass in 2020 found that over 2.7 million people over the age of 65 in the UK have been affected by abuse. This can range from physical, financial, sexual or psychological abuse, but can also be due to neglect. With an ageing population, services like the Hourglass 24/7 Helpline play a vital role in ensuring safer ageing and it is crucial that they receive government funding and ongoing support. The need for Hourglass to protect and support older victims of abuse has never been greater and yet their perilous financial position puts this unique service at risk.

Yet, older victims are last in line when it comes to funding. Research commissioned by Hourglass found that in the year ending 31/03/2021, a charity committed to stopping the abuse of children received £14 million in government grants, another animal welfare charity received £5 million in grants, Hourglass received £326,619 at a time when the charity was supporting a growing number of older people. These other charities deserve the support they get, we just ask that Hourglass also receive sustainable ongoing funding so it can continue to run its vital frontline services.

Sally Greengross was a tireless and inspirational campaigner speaking out for the thousands of anonymous older victims of abuse. She was often a sole campaigning voice in an under-represented area of abuse but by speaking out she became a much-needed voice for victims and for justice. Hourglass, in Sally’s name, is asking for your support to ensure this unique charity keeps saving and changing lives.

We the undersigned, ask that in Sally’s memory, and for the millions of older people affected by abuse, you ensure that Hourglass has the funding it needs to continue delivering its 24/7 helpline.

Why is this important?

The charity, which has the only UK-wide 24/7 elder abuse helpline and casework service, is seeing a marked increase in calls and is hitting a crisis point due to the lack of government and statutory funding.

The charity has seen a significant increase in helpline calls, answering 96% more calls in August 2022 than the same month last year, it is also reporting a waiting list for casework services. At the same time, the charity faces significant financial uncertainty with funding for this unique service being put out for commercial tender and £16,000 bridging funding from the Home Office nowhere near sufficient to maintain the helpline’s 24/7 operation.

How it will be delivered

This open letter will be sent to the Prime Minister in December 2022.