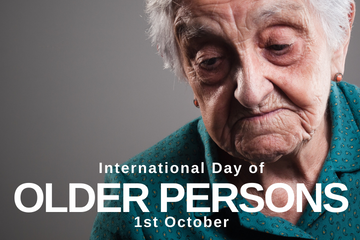 Older Victims of abuse are ‘invisible’ and ‘last in line’ for Government support says only UK-wide elder abuse charity.

Marking International Day for Older Persons, Hourglass (Safer Ageing) is calling on the government to urgently support older victims of abuse as they are currently last in line for funding support, as shown in recent research undertaken by the charity.

The charity, which has the only UK-wide 24/7 elder abuse helpline and casework service, is seeing a marked increase in calls and is hitting crisis point due to the lack of government and statutory funding.

During the last financial year Hourglass received £326,619 in Government grants. In the same year, fellow inspirational charities like the NSPCC (child abuse) received a government grant of £14.7 million, The Safelives Trust (domestic abuse services) £2.1 million, the Kaleidoscope Diversity Trust  (Freedom, Safety and Equality for LGBT+ People) over £1 million and the Dogs Trust (life-changing services for dogs in need) over £5 million.

The charity has seen a significant increase in helpline calls, answering 96% more calls in August 2022 than the same month last year, it is also reporting a waiting list for casework services. At the same time the charity faces significant financial uncertainty with funding for this unique service being put out for commercial tender and £16,000 ‘bridging funding’ from the Home Office nowhere near sufficient to maintain the helpline’s 24/7 operation.

“Our Helpline is receiving more calls than ever before dealing with horrendous and complex cases of abuse against older people, who otherwise feel invisible and under-supported.

“We cannot continue to be last in line for financial support. Charities across the entire spectrum of abuse undertake phenomenal work and deserve all of the support they get, but it is telling that the only charity that supports older victims of abuse receive only a fraction of the support. It is truly unacceptable.

“We are coming to a crunch point. If the Hourglass helpline does not receive adequate funding soon, we will have no choice but to downsize. This is disgraceful given the growing number of older people who need our support. We now need urgent action and dialogue.”

“We have an ageing population and more vulnerable older people - services like the Hourglass helpline play a vital role in ensuring safer ageing.”

The Government must ensure that funding is made available so that the Hourglass helpline can not only maintain but expand its important service to older people.”