IDOP 2022: Time to lift the cloak of invisibility that hides elder abuse 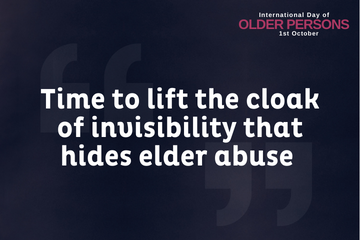 CEO of Hourglass, Richard Robinson has penned this blog, calling for government support to ensure that Hourglass can continue supporting older victim-survivors of abuse across the UK.

In a perfect world, marking International Day of Older Persons should not be used as a rallying cry for urgent support for older victims of abuse. We should be celebrating the unique ways that older people make such a difference to our lives, to our communities and to the understanding of current and future generations. Believe me, older people deserve that celebration more than most. As they, more significantly than any other age group, have suffered so much during the pandemic and the aftermath.

Instead, Hourglass needs to use this day to lift the cloak of invisibility that hides the inequality older victims of abuse face every day. To prove that older victims of abuse are not just the last in line, but the age group least supported by the UK Government when they face the horrors of abuse and neglect. This isn’t even merely a rally cry, it’s a desperate plea for help and understanding.

What’s more, the possible salvation for this significant funding shortfall, is also a challenge which treats older victims unfairly. Hourglass is being forced to compete against other worthy domestic charities for a small share of a pot of funds for ‘Violence Against Women and Girls’.  This is a so-called ‘retendering exercise’ in a subject area which makes up less than 60% of our casework. This is our only hope for a government funding, or we face downsizing significantly.

Why is competing a problem? Shouldn’t Hourglass roll up its sleeves and be content to compete with every other elder abuse helpline service for a share? The reason is simple. Hourglass is the ONLY such service and has been for over thirty years. There is no competition, we are instead delivering a bid that underlines why elder abuse victims need ANY support – against the similarly important needs of child abuse, LGBTQ+ victims, BAME abuse and specialist women’s agencies like Women’s Aid. All of them need support and all of them superb advocates for their victim-survivors.

The invisibility of older people has even made its way into popular culture this week, with the author and presenter Richard Osman who was promoting his new book, mentioning how his  septuagenarian heroes have “done these extraordinary things and yet they’re invisible because of the way we treat older people.” And he’s right.

Why do older victims of abuse seem to have fewer rights than younger people facing the same nightmare? And, in turn, why do older people face more barriers when looking for local authority care and support as victim-survivors? Even the recent UK Ministry of Justice funding for tackling domestic abuse, cascaded to the many Police and Crime Commissioners in England and Wales, seemed to significantly underplay the needs of older victims. We, as a charity, received six contracts from the multitude available. Much of the funding went to universal domestic abuse services who then seek urgent training in how to deal with older victims. When actually, specialist providers like Hourglass, have that expertise on tap. We’re here to help. You only have to ask.

There is also another awkward and difficult perspective to put on this ‘last in line’ equation. What if the Dog’s Trust faced such a significant shortfall in income that it was forced to downsize radically? Can you imagine the headlines? A charity that, understandably, uses funds to promote their fantastic services on prime time television, to ensure much-loved companions receive the support and love they need.

Hourglass, who support people who hold an equally special place in the hearts of families, are close to downsizing. We are close to ending life-changing programmes. But there is unlikely to be the same national outcry, as we are not on prime time television, we do not have a big name celebrity emblazoned across our promotional material and we not have images of lovingly rehomed animals to prove our need.

We’ve had rapes, attacks, thefts, predatory marriages and systematic neglect that is impossible to imagine.

But maybe that is part of the problem. Maybe elder abuse is so impossible to imagine that we simply decide not to. Perhaps the cloak of invisibility is for our own sensitivities because it is too sad and too traumatic for us to comprehend?  “Nobody would do that to my grandmother”

On International Day of Older Persons 2022, we call upon everyone to wake up, remove that cloak of invisibility and treat older victim-survivors as equals. We call for the UK government to fund Hourglass properly and enable us to grow to realistically care for the 15,000+ calls we receive per year. We are not a niche organisation, the 2.5 million people in the UK affected by elder abuse each year proves that.