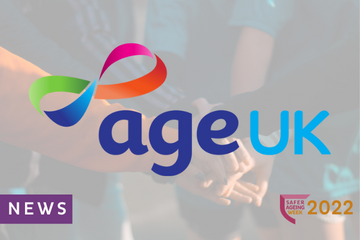 Hourglass, the only charity in the UK dedicated to ending the abuse and neglect of older people, has partnered with Age UK to support those most at risk. The launch is timed to coincide with Safer Ageing Week, underlying both charities’ commitment to a safer ageing agenda.

Hourglass will then help build tailored safety plans and work to support the service users to rebuild their confidence and recover.

This is the first time that the two organisations have worked in such a unique way together, yet they share a common bond with Hourglass’s founder, Baroness Sally Greengross launching the elder abuse charity from Age Concern’s HQ in 1993. Sadly, Baroness Greengross passed away in July this year, months before Hourglass’s 30th anniversary.

Research commissioned by Hourglass revealed the shocking data that 2.7 million people were affected by elder abuse in the UK, yet this remains a hidden epidemic.

It is under-recognised, under-funded and often victims fall through the cracks in the safeguarding process. This is where Hourglass plays such a pivotal role.

The Hourglass 24/7 helpline has also seen a significant increase in calls from those affected by abuse and neglect, with an increase of over 90% during August 2022 alone. This spike in calls has continued since the launch of the 24/7 service with night-time calls often mirroring the call numbers during working hours.

“We are keen to form partnerships with all age-focused charities and organisations to ensure we are able to support older victims of abuse when they need us most. Age UK is undoubtedly the largest such charity in the UK and we are delighted to form this association.

“Whilst the early incarnation of this programme will be focused primarily on Age UK’s own safeguarding team, both charities plan to roll this new pathway out further to ensure more and more victim survivors can benefit from this collaboration.”

“We are very excited about the partnership between Age UK and Hourglass. The pathway will enable us to reach more older victim-survivors of abuse and help them to access the specialist services they so desperately need.”

If you would like to support the work the charity does, please sign our open letter to Rishi Sunak, asking the government to ensure Hourglass has the funding it needs to continue to deliver it’s helpline and support the 2.7 million people affected by the abuse of older people in the UK. Click here to sign: https://bit.ly/OpenLetterToRishi

If you would like to make a donation, visit our donation page or text SAFER to 70460 to donate £10. Texts cost £10 plus one standard rate message and you’ll be opting in to hear more about our work and fundraising via telephone and SMS.

If you’d like to give £10 but do not wish to receive marketing communications, text SAFERNOINFO to 70460.