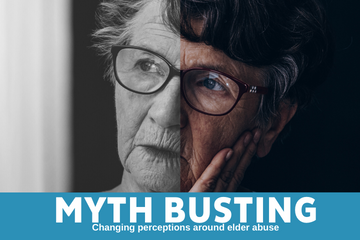 As we mark World Elder Abuse Awareness Day, Hourglass is launching a myth-busting campaign to share the reality of the abuse of older people. We hope that through sharing this knowledge, more people can begin to comprehend this growing epidemic that affects millions and be a part of our mission to establish a safer society for all.

Myth No. 1: Most abuse of older people occurs in nursing homes.

Fact: Most older people are abused in their own homes.

Abuse of older people occurs most often in community settings, with family members and other loved ones as the perpetrators. Even though the abuse of older people does occur in care and nursing homes, it most often happens at home behind closed doors, in every community, and regardless of socioeconomic status. In 2021-22, Hourglass received 2106 calls where abuse had taken place in the victim’s own home, compared to only 234 calls where abuse had taken place in a care or a nursing home. In almost all the cases we deal with, it’s not a stranger causing the abuse, it's a grandson, niece, daughter or family friend. People they put their trust in to not take advantage and harm them.

Myth No. 2: Caregivers who abuse do so because they are stressed.

Fact: Caregiver stress is real - but stress does not cause elder abuse.

Blaming the abuse of older people on stress moves the responsibility away from the abuser, and creates a sense of victim blaming. We know that taking care of an older loved one can be one of the most challenging duties you can undertake but the vast majority of family caregivers do not abuse their loved ones. Caregiving by its very nature can be stressful — but most stressed caregivers do not harm the person they care for.

Myth No. 3: If an older person is being abused physically, it will be obvious.

Fact: Even physical abuse may be invisible.

Some people may interpret bruises and other physical signs as the result of age-related issues, such as an increased risk of falls. Or an older adult who is being denied food may lose weight, but loved ones and even doctors may assume that’s due to other physical ailments. Psychological abuse and economic exploitation happen frequently too. None of the typical forms of abuse result in any obvious outward signs.

Myth No. 4: If older people say they are not being abused, it didn’t happen.

Fact: Many older victims of abuse decide not to tell anyone what happened to them.

Hourglass and other expert practitioner organisations suggest that many older people don’t report the abuse because they are afraid of getting a loved one in trouble. Some don’t report the truth because they worry the alternative — such as going to a nursing or care home - would be worse.  People may also be ashamed and blame themselves. They think ‘how could I have let this happen?’

Myth No.5: The abuse of older people happens to older men and older women equally.

Fact: The majority of older victims of abuse are women.

The abuse of older people happens most often to women, but plenty of older men fall victim too. Between April 2021 and March 2022, Hourglass saw almost 60% of its calls concerning female victims (59.6%), while calls concerning male victims only accounted for just over 30% of total calls (32.2%.) Regardless of gender, those with some type of cognitive impairment are at greatest risk of being abused. As noted, Hourglass receives many more calls from older women who have been abused but we believe our calls from older men are just the tip of the iceberg.

Myth No.6: Perpetrators of abuse always get caught.

Fact: Most perpetrators of abuse never come to the attention of the criminal justice system.

Criminal or civil prosecutions of abusers are actually the exception rather than the rule.

This is sadly the case because most victims don’t talk about their abuse. They’re afraid, embarrassed or simply unable to report any wrongdoing to authorities. There is also the fact that many victims do not want to criminalise their own families – who are often the perpetrators.

Myth No.7: Domestic abuse within an intimate relationship only involves younger couples.

Fact: “Victims aged 61+ are much more likely to experience abuse from a current intimate partner than those 60 and under.”[1]

A study by Safe Lives underlines this common misconception, as well as highlighting that older victims are more likely to be living with their abuser and are less able to attempt to leave them. Between April 2021 and March 2022, Hourglass received 653 calls related to older victims of domestic abuse, although the number of yearly UK cases is far higher than that. Domestic abuse is not just about younger couples –it’s just as important to understand the domestic abuse of older victim survivors too.

Myth No. 8: Older people are not at risk of sexual abuse.

Fact: Age is not a protection from sexual abuse.

For a long time, the sexuality of older people and their potential sexual abuse has been seen as a taboo subject by both researchers of the abuse of older people, and by the general public themselves – this has led to older people being seen as non-sexual or asexual and not at any risk of sexual abuse. Unfortunately, this is not the case – although sexual abuse is the most uncommon abuse type that Hourglass receives calls on (86 calls between April 2021 and March 2022) older people are still at risk of it. Much more support needs to be given to older people as sexual beings, and to protect them from sexual abuse.

Myth No. 9: Domestic abuse and elder abuse is the same thing.

Fact: While both cause harm to older people, there are clear differences.

While aspects of elder abuse can involve perpetrators who are intimate partners or family members, there are key differences. The Domestic Abuse Act 2021 defines domestic abuse as behaviour between persons who are “personally connected”. This does not include perpetrators such as carers, medical professionals, or neighbours/friends which Hourglass sees in many calls. Elder abuse on the other hand, is defined by Hourglass as “as a single or repeated act or lack of appropriate action, occurring within any relationship where there is an expectation of trust, which causes harm or distress to an older person.”

Myth No. 10: There is nothing you can do to support older victims of abuse.

Fact: Hourglass is here to help.

There are a number of things you can do to support older friends or family members who you fear or know are victims of abuse. These include phoning the Hourglass helpline (0808 808 8141), finding a useful support organisation local to you through our knowledge bank signposting tool, or talking to a trusted friend or family member, your G.P, or your local authorities adult safeguarding team.