Age Reform Coalition: Campaigning to Improve the Quality of Care 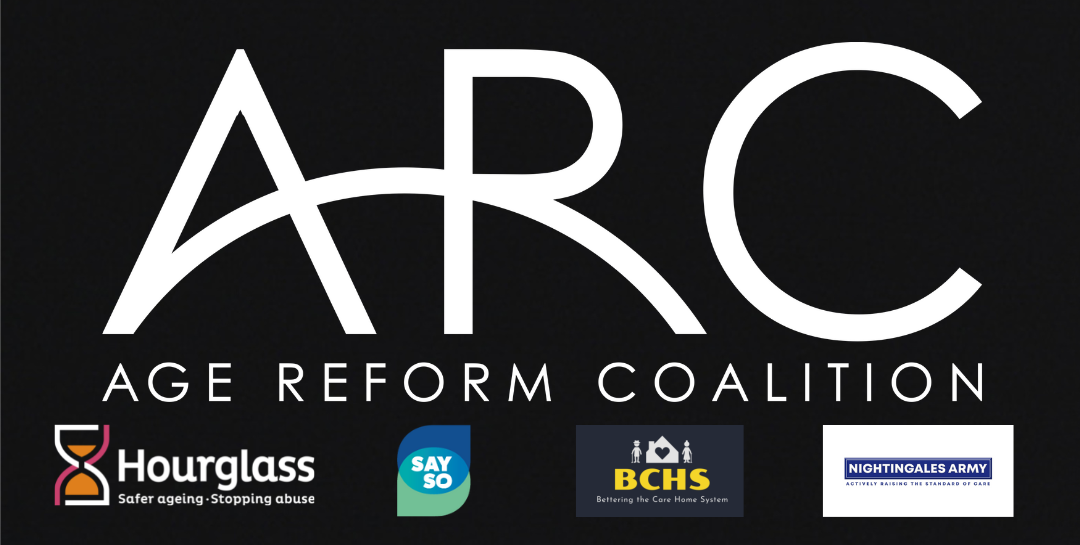 The Age Reform Coalition (ARC) is a newly formed coalition of third-sector organisations, seeking to improve the quality of care for older people throughout the UK. We want to encourage the support of influential figures to establish safer ageing for everyone.

The UK has a growing population of older people, yet they continue to be last in line when it comes to public awareness and political attention. Finally, the NI levy means that there will be a golden opportunity to invest in and reform the care system, an underfunded and underappreciated sector that is invaluable to the wellbeing of older people. ARC have some innovative and important solutions to improve the quality of older people’s lives across the UK and we’re taking steps to lobby, scrutinise and campaign for changes in the care system and beyond.

Haven’t heard of ARC? Watch this short video below.

ARC is led by Hourglass, the only charity in the UK dedicated to ending the abuse of older people and promoting a safer ageing agenda. In 2021, our research revealed the abuse of older people was mentioned just 9 times in debates in all Parliaments and those mentions were in the House of Lords or Scottish Parliament. There wasn’t a single mention in the House of Commons by Ministers or MPs over the 12-month period.

Nightingales Army was founded by Elizabeth Fox and Felicity Miles, after they lost their care home jobs as a result of whistleblowing. They now campaign to elevate the profile of healthcare assistants and work for better and more representative training

Bettering the Care Home System (BCHS) was founded by Pat Taylor after his blind mother was moved between 9 care homes in 18 months, caught COVID-19 twice, was wrongly sectioned and suffered from severe neglect and abuse. BCHS is working towards transparency within care home ownership and changes in age related legislation.

Say So was founded by Shaun Keep and Paul Adams, two former police detectives in the Metropolitan police, who were frustrated by the level of missed opportunities to prevent serious care failures. They formed Say So, a confidential whistleblowing organisation for healthcare assistants to report workplace concerns.

ARC is working towards establishing an APPG (All Party Parliamentary Group) on Safer Ageing as an ultimate ambition, however our initial focus is on the care home system. This is a system that is in dire need of reform, legislative change and funding to be able to provide a safe environment for older people, without the risk of abuse and neglect.

ARC is looking to review and lobby for changes in age related legislation, campaign for the improvement of professional standards, employee rights and to develop a common safer ageing agenda that can ensure that older people are kept from harm.

The launch of ARC started with the hosting of three roundtable webinars, involving knowledgeable panellists, insightful questions from the audience and an emphasis on finding solutions to the current situation.

1. How can we improve training in the health and social care sector? - Nightingales Army

3. Creating safe home environments by removing the barriers to speaking up - Say So