World Elder Abuse Awareness Day: 15th June 2022 – What is Elder Abuse and what are the signs? 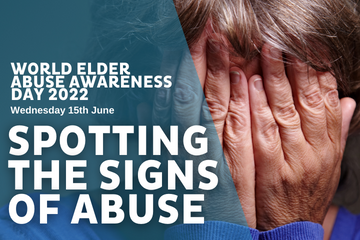 As we mark World Elder Abuse Awareness Day, Hourglass - the UK’s only charity focused on the issue, is urging friends and family to look out for the tell-tale signs in older relatives.  The charity, founded almost 30-years ago, has produced a quick guide to make people aware of subtle signs of abuse and neglect.

An estimated half a million older people are harmed, abused, and neglected every day in their own homes by people they thought they could trust. With the cost of living rising and the current headlines around unaffordable fuel and heating bills, older people are likely to rely more and more on help from those they trust.

Hourglass runs the only 24/7 helpline for older people at risk or experiencing abuse and neglect, and its team has pulled together top four tips to help people spot the signs at WEADD:

Abuse can be hidden by perceived confusion. An older person’s uncertainty or inability to explain what is happening to their finances could be economic abuse. This type of abuse can come in the form of stealing, having control over someone’s money, fraud, or embezzlement. In 2020, at least £13 million was reported as stolen, defrauded, or coerced from older victims to Hourglass.

Emotional, psychological, or mental abuse can include ignoring, bullying, or humiliating someone as well as depriving someone of their right to make decisions, choose when to eat, when to get up and who they spend time with. It is often intended to undermine someone’s self-worth and can leave a victim feeling anxious and withdrawn. Look out for a change in behaviour in older people you know.

3.     Under or overuse of medication

Injury or mistreatment is a telling sign of physical abuse and can include hitting, pinching, pushing, inappropriate use of restraints, force feeding or the rough handling of an older person. Over or under-medicating is a form of physical abuse without obvious signs of injury. To spot the signs look out for untouched or already empty medication packets.

Sexual violence is the form of abuse least likely to be talked about in relation to older people. It includes forcing someone to take part in sexual activity without their consent, including touching, sexual assault, sexual harassment, and the use of sexual language. A potential sign of sexual abuse could be discomfort in the genital area which leads to difficulty sitting down or walking around.

Richard Robinson, CEO of Hourglass, is urging people to use the high media profile of elder abuse during WEADD to learn more about the issue and to learn how to spot the signs to protect them:

“The abuse suffered by older people is a truly hidden issue and whilst WEADD is a fantastic opportunity to raise the profile – this is a growing epidemic and needs to be considered every day of the year.

“So much goes on behind closed doors, with friends and relatives none the wiser. I think the public would be appalled if they knew the extent of the problem. That’s why understanding is so important. We need people to be vigilant and sport the signs.

“Abuse can occur anywhere, including someone’s own home, a carer’s home, a day care setting, a care home, or a hospital. We want people to be more vigilant and open their eyes.”

The charity notes that abuse can be carried out by anyone, but often the victim knows their abuser and is most often an adult son or daughter.

Hourglass is urging anyone worried an older person is at risk or being abused to get in touch. The charity has also launched an instant message platform, text and chatbot service so concerned people can receive help. The website www.wearehourglass.org also provides access to a knowledge bank containing useful and accessible information related to the abuse of older people.

If you’d like to support the unique work of Hourglass please head to wearehourglass.org/donate or ring on 0208 835 9280. More importantly, if you or someone you know has been affected by abuse please make that call and talk to the 24/7 Hourglass team on 0808 808 8141, visit the website for Instant Message support or text our confidential SMS service on 07860 052906

Geoffrey’s mother was financially abused by a member of their family. When Geoffrey’s father died his mother needed somewhere to live. A family member offered for her to move in:

“She paid all the bills, she was very kind and generous to them and for a long time was very happy. It wasn’t until my mother died that I discovered the abuse she had suffered. They had been stealing her pension and fleeced her of her finances. The worst thing to me is that as she was lying dying in the next room on her death bed, they were on the computer transferring money across from my mother’s account. It’s hard to think that someone would do that.”