A word from Hourglass' CEO 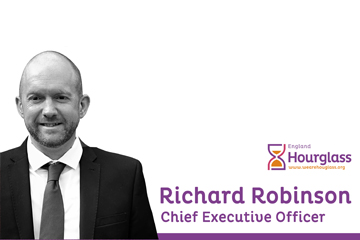 Every year, more than one million older people are physically, emotionally, financially or sexually abused and neglected in the UK. These are our mothers, fathers, uncles, aunties, grannies, grandads, friends and neighbours.

In my case, it was sitting in the waiting room of a mental health facility which made me turn to this charity for advice. Being the Chief Executive of the UKs only charity focusing on the abuse of older people was never my plan or my dream. But in the throes of my own family nightmare back in 2018, this charity was the catalyst for my next steps.

A very close relative had undergone a traumatic experience, which could and should have been prevented, at a mental health unit nearby. I had never heard of this charity. But in the time it took me to Google search, I found an inspirational organisation. A charity not too far from the headlines and definitely changing lives. I learnt that representing those older people at risk of abuse takes a special kind of person and a very special charity. The charity is called Hourglass.

Incredibly, just six months after my family’s’ own nightmare, I became CEO of this wonderful organisation. But all the superlatives about Hourglass can’t stop me from feeling that this battle is a truly damning indictment of how our society views and values older people. Sadly, the abuse of older people is not a new issue, but one that has now reached a critical threshold that can no longer be ignored, nor tolerated. This is now my mission and I have joined an experienced team who are truly on the front line.

The sad fact is, that time is running out for the very people whose remaining years are so precious. And with an ageing population, we need to turn the hourglass for millions of people before it’s too late. We are ready to take a stand and fight for those whose voices are so often ignored or stifled.

I am proud to say, We are Hourglass – the only UK-wide charity that’s calling time on the harm, abuse and exploitation of older people. Driven by our values, we’re invested in - and investing in - making a difference. It takes honesty to face up to these challenging issues. It takes a special kind of courage to bear witness to the heart-breaking stories of abuse and neglect we hear every single day. And it takes a dedicated team with nearly 30-years of experience and unique expertise to fight for our most vulnerable, day in and day out.

This isn’t about growing old gracefully. Safer ageing is about creating environments and procedures so that older people are not put at risk of abuse or neglect. Just as crucially: it’s about empowering older people so they can, where suitable, live their lives independently and fully trusting those people around them.

This will not be an easy journey. Yet with your support, we will work tirelessly to influence, challenge and educate; listen, advise and support; and will commit to working in partnership to deliver positive change for vulnerable older people and all those affected throughout the UK.  And we will create an environment where safer ageing is guaranteed for all.

Now is the time to join us on this journey to end the abuse, harm and exploitation of older people. In doing so, you are helping us build the fairer and safer society that we all want and deserve.  Read our full manifesto pledges here