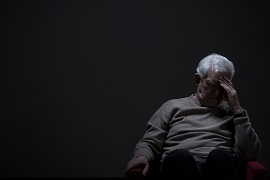 Many of us feared the pandemic would have a devastating impact on some of the most vulnerable people in our community and the research on child abuse, poverty and neglect published yesterday shows that in the starkest of terms (Revealed: England’s pandemic crisis of child abuse, neglect and poverty).

We have failed to protect our children, the youngest members of our community, and we have also failed other vulnerable groups, with the pandemic exacting a similar toll on those at the other end of the age spectrum. Research produced by Hourglass in 2020 showed that over half (53%) of people in the UK felt that the abuse and neglect of older people had increased as a result of lockdowns.

Older people have been profoundly affected by the pandemic, being those who are mostly likely to die or get seriously ill because of the virus, but thousands have also been indirect victims as a result of abuse and neglect. This isn’t an issue that only affects a small segment of older people - the WHO estimates that globally around 1 in 6 people aged 60 years and older experienced some form of abuse during the past year. The vast majority of the abuse and neglect of older people takes place behind closed doors and many doors have remained firmly shut during our lockdowns.

Evidence from domestic abuse charities and campaigners shows that during times of stress and societal instability, rates of violence rise. Reports have indicated there was a surge in domestic abuse cases as a result of the lockdown. Older people were put in danger from increased isolation as the normal safeguards offered by regular day to day contact with the outside world fell away, making cases of abuse and neglect even harder to spot.  With 1.2 million older people in the UK believed to experience abuse every year before the pandemic, the added stress of a lockdown is likely to have drastically increased that number.

As we are seeing with children, the full scale of the abuse and neglect of older people is only now becoming apparent as those doors are prized open. Every day on calls to our helpline we hear harrowing accounts of what some people have experienced behind those doors during this lengthy pandemic. In the entirely understandable rush to contain the pandemic and start the process of recovery, we must take the time to examine how we have failed the oldest and youngest in our society, increase the support that is available to them right now and do everything in our power to make sure the levels of abuse and neglect that have burgeoned shamefully are confronted and never allowed to happen again.

Click here to read what we stand for as a charity and how we are calling time on the abuse of older people.