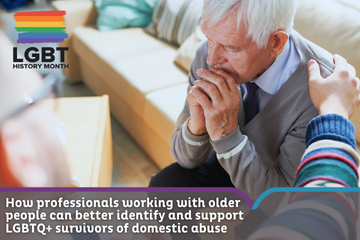 February marks LGBT+ History Month and to mark this, Hourglass would like to highlight and raise awareness of the challenges faced by older abuse victims who are members of the LGBTQ+ community.

Raf, an LGBTQ+ Independent Domestic Violence Advocate (IDVA) is looking at how organisations can further provide support for older LGBTQ+ survivors of abuse. To do this, they’re examining a number of statistics collected by National LGBT abuse charity Galop, along with a case study that involves the Domestic Homicide Review (DHR) into the death of Mr. C, who sadly lost his life in 2012 at the hands of his partner.

Galop’s 2020 report 'LGBT+ people’s experiences of domestic abuse’, states that victims/survivors over the age of 50 report the highest levels of abuse across all types of abuse, regardless of whether the perpetrator is a family member or intimate partner. Older people face significant barriers when help-seeking, including having fewer support networks and having different responses to domestic abuse than younger people.

The levels of distrust for example, in criminal justice systems are incredibly high in older people, many of whom will have experienced historic abuse and discrimination from the state. Due to this, many older people feel completely disenfranchised by support services. Older people over the age of 50 within Galop services only accounted for 12% of their caseload, with only 1% of their service users being aged 65 or over. These statistics show that more needs to be done to help heal from historic injustices and services need to be able to show LGBTQ+ older people that they are supportive, open and inclusive.

Mr C was a man who services, after his death, had been identified by the DHR as vulnerable due to health problems, alcohol misuse issues and his sexual orientation, with all of these factors potentially making it more difficult for him to ask for help. Mr C’s case is emblematic of the intersectional barriers which can prevent LGBTQ+ older people from gaining help and support.

Health professionals regarded Mr C’s largest risks as the physical abuse at the hands of Mr Y, and the financial exploitation which was clearly in the picture. As the abuse escalated, it is catalogued that there were several opportunities to identify Mr C as a victim/survivor of abuse, however sadly these lost opportunities came after Mr C was assaulted by Mr Y and was hospitalised. His family identified at the trial of Mr Y. that interventions could have been offered at key points in Mr C’s life, however his alcohol use took the forefront of professionals concerns for him, masking the coercive control.

Full article will be available on the Knowledge Bank shortly.

Raf is an LGBTQ+ IDVA within Brighton and Hove LGBT Switchboard’s domestic abuse service. They work from an intersectional standpoint to combat the institutional and historical inequalities that LGBTQ+ communities experience. The domestic abuse project works with anybody aged 16+ who has experienced or is experiencing domestic abuse and needs 1:1 IDVA support and advice.

To find out more, visit our website here: Domestic Abuse - Brighton & Hove LGBT Switchboard. If you want to support the work that Switchboard does and have gotten something out of this blog post, please consider supporting our Crowdfunder here: Switchboard Community Build Back Fund - a Community crowdfunding project in United Kingdom by Switchboard (crowdfunder.co.uk)