Along with a range of vital new services provided by the UK’s only charity focused on the abuse of older people – Safer Ageing Week underlines staggering new figures. An Hourglass-commissioned poll highlights over 2.7m older people have been affected by abuse. This survey also illustrates some troubling beliefs and attitudes around elder abuse.

Hourglass, is the only UK-wide charity focused on the abuse of older people and championing safer ageing. We know that the abuse of older people – side-lined in decision-making for decades – is more prevalent in our communities than ever before. With risk of abuse acutely exacerbated by COVID-19 restrictions, the outlook for each of us ageing in the UK is concerning.

Our unique recent research has revealed some shocking findings and we are calling on the Home Office to join our movement for safer ageing launching with the first annual Safer Ageing Week on 30th November 2020.

The UK has a problem. We want you to lead the way in changing how older people are viewed and considered by decision makers. Older people face both physical and attitudinal barriers that create circumstances of age-related vulnerability – an environment which puts older adults at risk. Our movement for safer ageing seeks to remove these barriers and to empower older people to age securely and live free from abuse. 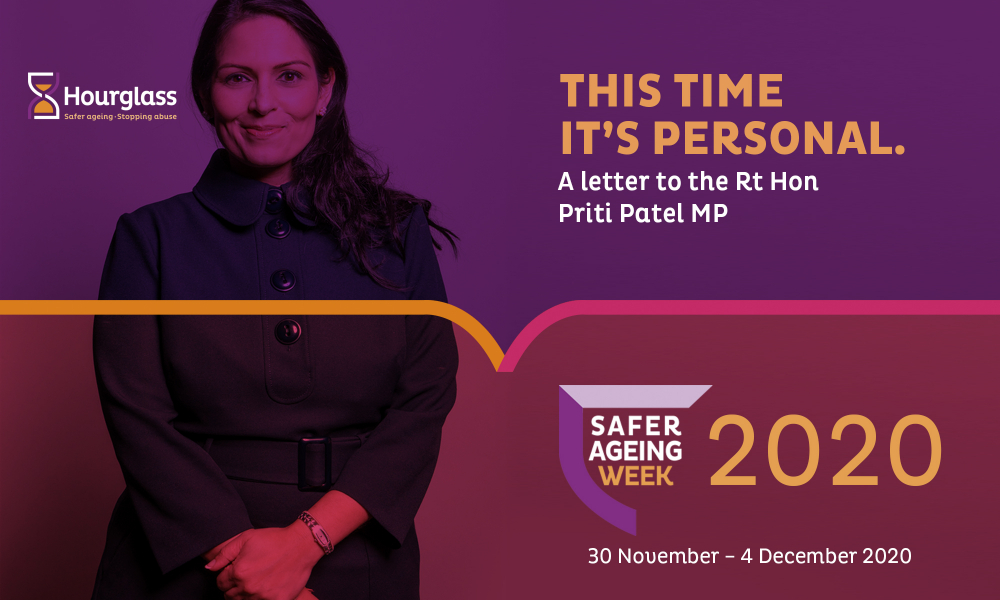 In February we conducted a survey looking at experiences, attitudes and perceptions towards the abuse of older people, ‘Growing Old in the UK 2020’. The second round of the survey took place in June, to account for the changes brought on by the pandemic, ‘Growing Old Under Lockdown in the UK’. We found that at least 2.7 million people across the UK over the age of 65 have experienced abuse – this is nearly one in 5 people over 65, an astonishing figure. This is a much higher prevalence than the UK national prevalence study estimated in 2007, or than has been estimated by the World Health Organisation’s global study from 2017.

The abuse of older people, to the detriment of victims and families, has not been given the consideration it needs. This must change.

Key findings in our polling:

85% of UK residents think that the abuse of older people is a problem in the UK today.

Over half of people (53%) believe that the abuse of older people has increased as a result of the lockdown.

Attitudes regarding what ‘counts’ as abuse are thought to be fuelling the crisis: nearly a third (30%) of UK residents don’t see acts of domestic violence directed at an older person as abuse, this is the same for pushing, hitting or beating an older person.

There is a disconnect between attitudes towards what abuse is and looks like and a public concern about the high prevalence of abuse in the older community. The experiences of older people must be represented at the top of Government to close this gap – you can make this difference.

The COVID pandemic, which poses an exceptional danger to older people, has rightly energised many government departments to consider impacts on older people. However, these changes have not gone far enough. No groups or organisations representing older people sat on the Government’s recent Hidden Harms summit – despite our argument that the abuse of older people is one of the most poorly understood types of abuse. Furthermore, MPs on both sides of the House failed to ask older people for their experiences when debating the Domestic Abuse Bill. Although not all abuse of older people is domestic abuse, this Bill as it stands, is missing a real opportunity to strengthen protections for older people.

Finally, though a powerful and far reaching campaign, the Home Office’s #YouAreNotAlone initiative failed to respond to the different needs of older victims of abuse. The message empowering victims to leave home and seek refuge despite the lockdown rules failed to account for the challenge and complexity of leaving home for older people. Leaving an abusive environment is only a solution if there is appropriate alternative accommodation and if one’s care and support needs can be met. Further, this instruction conflicted directly with the public health directive for over-70s to shield from the coronavirus. Older people are continuously being denied a voice and the ramifications of this have a devastating effect on victims, families and communities.

As a direct result of the data we gathered, Hourglass have introduced extra measures to better protect and support older people. These include diversifying the ways we give information and advice with a new Knowledge Bank - an initiative supported by yourselves - instant messaging and a text message service. With these changes we hope to reach more older people and concerned enquirers no matter what restrictions remain in place. However, we need your help to bring safer ageing to the forefront of the national agenda.

We urge the Home Office to lead a transformation in decision-making, to commit to ensuring the experiences of older people are represented in key meetings and to encourage all ministerial departments to consider safer ageing in their work. Action needs to be taken now, including developing a targeted wave of activity specifically for older people as part of the #YouAreNotAlone campaign. Our polling insights will be invaluable in helping this campaign reach all victims of abuse.

Older people’s voices need to be heard, now more than ever.  At Hourglass we represent those people and their experiences. Our initiative for Safer Ageing Week, starting on the 30th of November, with your support, will galvanise awareness of the abuse of older people; inform the public of the signs and manifestations of abuse; and trigger a turning point in the national agenda – putting safer ageing at the heart of decision making. Yours sincerely, Richard Robinson Hourglass CEO