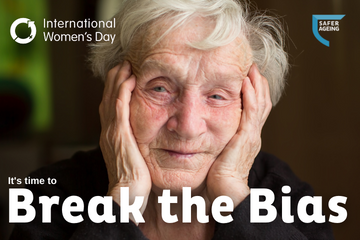 Hourglass marks International Women’s Day, the global celebration of the social, economic, cultural and political achievements of women, by looking at age-specific issues as part of the #BreakTheBias campaign. The event is an opportunity to raise awareness of women-specific issues and to rally for women’s equality. And #BreakTheBias, highlighting  deliberate or unconscious bias, underlines a barrier to achieving equality for women everywhere of all ages.

Bias plays a significant role in setting up barriers preventing older women from receiving the help they need if they suffer from abuse. The expectation for older women to remain within a family unit, even if domestic abuse is occurring, alongside a generational normalisation of abuse, creates barriers to receiving much-needed help.

Breaking this bias against older women is essential to enable them to receive necessary support from organisations and charities such as Hourglass, who are there to help those in abusive situations. At Hourglass, we want to raise the awareness that domestic abuse is never okay, no matter what age, and that we are there for older women.

The bias continues when it comes to depictions and public awareness of abuse against older women, with more  focus towards younger individuals, instead of depicting the reality that abuse happens to women of all ages. Until recently, over 75s were not included in national domestic abuse data at all and our shocking Last In Line research found that public awareness of abuse towards older people is worryingly low, with only 7% of people thinking of older people when they think of victims of abuse. In addition, in over 500,000 tweets mentioning domestic violence and abuse, only 0.3% also referenced older people. The lack of attention that the abuse of older people receives also appears in Parliament, with the abuse of older people being mentioned just 9 times in debates in all Parliaments since December 2020. This is compared to 400 references to parking, 70 references to potholes and 13 references to television licensing.

In the past year, we’ve continued to campaign for safer ageing while supporting individuals concerned about abuse through our Helpline services. We’ve released the first ever UK wide Knowledge Bank for all information regarding abuse against older people and have even launched a new IDVA service in Sussex to support those suffering from abuse. We’re committed to changing the lives of older people through these services and we’re only just beginning to #BreakTheBias.

If you would like to support the work we do to help older victims of abuse, you can make a donation here. We’re incredibly grateful for your support.