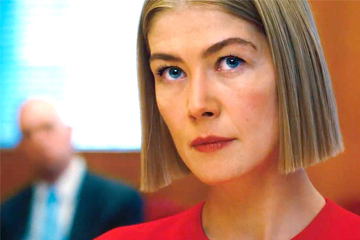 Unlike crimes such as murder, rape, or domestic violence, the abuse and neglect of older people has never been a cinematic staple and representations of this phenomena in film continue to be rare. IMDB only lists forty film and TV shows tagged with the keyword “elder-abuse,” and these run from crime-dramas like Herzog’s Bad Lieutenant, through to family-dramas like Peng’s Freezing.

Released in 2020 and written and directed by J Blakeson, I Care A Lot stars Rosamund Pike as Marla Grayson, a court appointed guardian who convinces the legal system to grant her guardianship over older people she pretends cannot take care of themselves. Marla then sells off the assets of those she is guardian of, pocketing the proceeds, and forces her victims into an assisted living facility run by a fellow abuser.

Grayson and her business partner and girlfriend, Fran played by Eiza González, are made aware of a potential “cherry.” A “cherry” is a wealthy older person with no living relatives. Falsely testifying that their “cherry,” Jennifer Peterson (Dianne West) suffers from dementia, a judge appoints Marla as guardian, and she gets to work selling off Jennifer’s home. Finding a safety deposit box containing diamonds, Marla takes these also.

Unbeknownst to Marla, Jennifer is not without relatives, but is instead the mother of Roman (Peter Dinklage,) a Russian Mafioso involved in human trafficking. Greatly distressed, Roman wants both his mother and his diamonds back, and will do anything to get them.

A psychological crime flick, a thriller, and a pitched pastiche of the hidden brutality of capitalism and the “American Dream,” I Care A Lot does not shy away from illustrating the horrors of financial abuse through corruption of the guardian system. Two scenes stand out, one in Marla’s office where a discussion about a recent death illustrates how her victims are perceived like commodities, stripped of human characteristics, and viewed through a lens of ageism, and personal benefit.

The second scene is when Marla turns up at Ms Peterson’s door, having unknowingly placed Jennifer into her care. We see through Jennifer’s eyes, the horror when Marla shows her the paperwork and then gestures at policemen who are waiting in case she doesn’t go. The Kafkaesque feeling of confusion continues to the care home where Jennifer is whisked away to a room and locked in. As Peter Bradshaw in his review for the Guardian notes “There is something all too plausible about poor Mrs Peterson’s grimly trusting belief that if she submits to being locked up now, this whole mistake can be rectified... We can all imagine that happening to our mum or dad...It’s impossible to watch this scene without a spasm of anger.”

Far from merely causing anger, from start to finish this film is fury inducing, with the illustration of Rosamond Pikes’ character and her co-perpetrators crimes, and the lack of any criminal justice. Positioned as “antiheroes,” the gleefully predatory and psychopathic nature of Marla and Fran as characters made them impossible to connect with, and I unfortunately found myself rooting far more for Peter Dinklage to rescue his mother and murder Marla and Fran.

While very well acted, I Care A Lot fails overall in being a good film. While as a way to raise the profile of financial abuse of older people it has its merits, its storyline and writing ultimately bring it down, its insistence to view Marla and Fran as characters to root for, and the lack of focus on its older characters following the halfway mark turns it into a standard heist/crime movie, whereas it could have been a call to arms on the abuse of older people.

For public awareness reasons, It’s positive to see the abuse of older people being the key theme in a film, however for a non-fictionalised exploration of abuse/mistreatment in the US’s guardianships system, I recommend instead Billie Mintz’s 2018 documentary The Guardians which examines the systemic abuse of elderly people in Vegas.