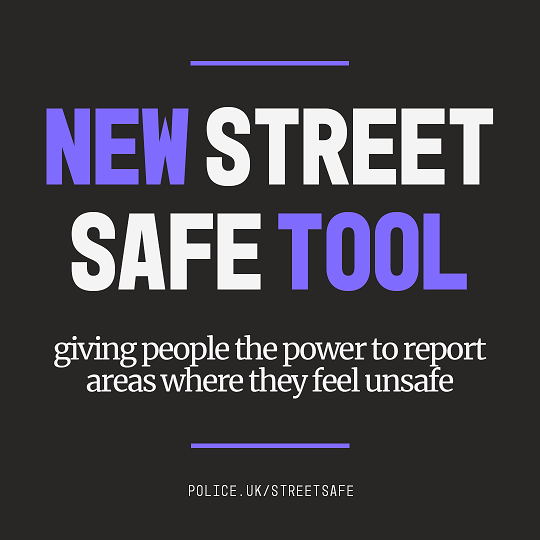 As part of the government’s strategy to tackle Violence against Women and Girls (VAWG), the Home Office has launched a new online tool named Street Safe to enable people, particularly women and girls, to help keep them safe on the streets.

From the 2nd November, the tool, which can be found on police.uk, enables individuals to pin-point locations where they have felt unsafe and to identify the features that made them feel unsafe. Features that could be reported utilising this service includes environmental issues such as poor street lighting, vandalism and abandoned areas or if this is due to behaviours from other people; for example, being followed or verbally abused.

Police will then be able to use the logged information to make improvements to unsafe areas, which could include responses such as increased street-lighting or extra patrols from police officers. The data collected through Street Safe will be completely anonymous and focuses on tackling the factors of particular locations that make people feel unsafe, therefore improving wellbeing and safety for communities.

Whilst the service will take reports from everybody, a principal focus of Street Safe will be to improve the safety of Women and Girls. This follows a strategy from the Home Office to tackle VAWG, after the devastating case of Sarah Everard, with the government allocating £25 million to the ‘Safer Streets Fund’ and establishing a number of strategies committed to bolstering safety for women in public spaces.

The service, developed by the Digital Public Contact programme and working in cooperation with the Home Office, launched on the 2nd September as a national pilot for three months. Also confirmed is that the service is not a means of reporting crime to the police and individuals have been advised to contact the police via 101 and 999 instead.

At Hourglass, we are committed to addressing the abuse of older people and establishing a culture of Safer Ageing. Alongside our free helpline and messaging services, online tools such as Street Safe can help establish a safer environment for everyone, especially for older people and the most vulnerable people in our society.

To use the Street Safe online tool, please visit here