First in the UK: Unique Sussex scheme set to support older people at risk of abuse 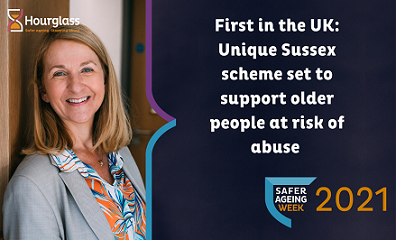 On Monday 29 November, Hourglass the UK’s only charity focused on tackling the abuse and neglect of older people, is launching a new service in Sussex as part of Safer Ageing Week 2021.

In a first for the charity and in the UK generally, older victims of domestic abuse will soon be able to get support from trained Independent Domestic Violence Advocates (IDVA’s) who will uniquely specialise in working with those over 65.

The IDVA’s will provide tailored and specialist support to older people who have experienced abuse and neglect. Most often people will be referred via Hourglass’ helpline or from local partner organisations.

In Sussex there are an estimated 7% of women and 4% of men who have experienced at least one episode of domestic abuse in the last year. Playing a key role in meeting the needs of this at risk population, IDVA’s will lead the way in implementing Hourglass’s aims for England across, East and West Sussex, Brighton and Hove, to ensure safer ageing for all.

The three Sussex based IDVA’s will be working up and down the county and are launching the service with a series of pop up clinics where they can meet service users face to face. The first pop up clinic is being held in the grounds of Chichester Cathedral on the 29th of November between 10am and 4pm. Hourglass encourages anyone who might need support to come along.

IDVA’s will work within Hourglass’ new community hub structure and will support people remotely at first with the intention of establishing a physical base in the long-term.

Katy Bourne, Sussex Police & Crime Commissioner, said:
“I am delighted to support Hourglass, the UK’s only charity focused on tackling the abuse and neglect of older people, in launching its specialist Independent Domestic Violence Advocate (IDVA) service in Sussex. This important and much needed service will provide vital support to older people in our community who experience harm and abuse from those who they should be able to trust.”

Richard Robison, CEO of Hourglass, said:
“Our national helpline is a lifeline to older victims of abuse and their families. But, this new service will help us build stronger, more targeted links into the local community in Sussex, allowing us to support individuals over a longer period of time to help them live safe and fulfilling lives.
“We’re proud to be working alongside the Police and Crime Commissioner to provide such a vital service. Abuse towards older people is an issue that needs addressing head on in communities across the UK and the provision of IDVA’s is the way to do this. We’re looking forward to rolling out this tailored and specialist support across Sussex and beyond.”

Hourglass is launching its IDVA service to mark Safer Ageing Week 2021 in which the charity is set to release a new study into how the abuse of older people falls last in line in government and public priority.

The model in Sussex will act as a pilot for other specialist domestic abuse services across the UK. Hourglass is looking to collaborate with other charities and authorities to tackle domestic abuse across Sussex.