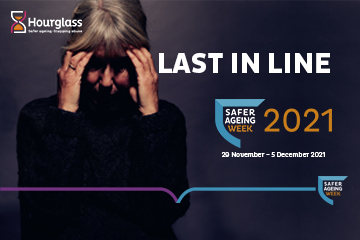 To coincide with Safer Ageing Week Hourglass, the only charity in Northern Ireland focused on tackling the abuse and neglect of older people, has examined the profile and priority given to the issue by the UK Government and the public over the last year.

Stark findings highlight how the public don’t consider the abuse of older people – and more staggeringly - those in power, responsible for safeguarding, have given no mention of abuse towards older people across the past year, even after living through a pandemic and the public are unaware of levels of abuse in the UK. The charity’s study found:

The research, compiled in a report called “Last in Line” is stark in its findings and shows just how little profile and priority the issue has in government and for the public.

It also established that there currently isn’t a single source of statutory funding in Northern Ireland with ring-fenced resources to tackle the abuse of older people. Hourglass noted no funding has been allocated to this issue specifically since 2016.

“It’s shameful that an issue that affects a million older people a year is given so little attention by ministers, politicians and the general public. Rightly, other forms of abuse like child abuse and domestic violence have a high profile but it is unbelievable that a niche issue like grouse shooting gets so much more attention than the abuse of older people.”

“We urgently need to push the issue forward from last in line and sound the alarm for the impact it is having on older people and those who care for them. Even since the pandemic, major public and government funding have forgotten the 2.7 million older victims of abuse and neglect every year in the UK.

“We want to join forces with our peers in the abuse sector, be given the same significance and urgency and end time on all forms of abuse and neglect. Without dedicated resources, we are only going to see the problem worsen and end up with many more older people experiencing or being at risk of abuse.”

“Hourglass NI is dealing with 13 live cases of abuse and neglect and the charity receives over 8,000 calls a year. However, the subject seems to be almost off the radar across all UK legislatures and lacks profile amongst the general public.

“I would strongly urge all of my colleagues across the Parliaments, Assemblies and Senates to look at supporting Safer Ageing Week and consider our role in creating real change in this vital and growing subject area. Hourglass NI is unique in dealing with this issue and this study casts a damning light on attitudes.”

Hourglass commissioned the research to highlight just how low a priority tackling this form of abuse is during Safer Ageing Week. It is calling for:

The charity has nearly 30 years’ experience as Action on Elder Abuse and over that time its work has touched tens of thousands of people, shaped government policy and amplified the issue in national press.

The charity staffs a free-to-call helpline which is a lifeline for older men, women and their families suffering from the five forms of abuse: physical, psychological, financial, sexual or neglect.